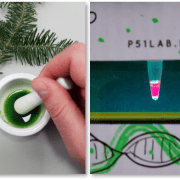 Add some fluorescent spice to your old leaf chromatography lab.

But what learning objectives can be attached to a hands-on chlorophyll lesson? When I teach about chlorophyll, I want students to discover that chlorophyll has two important properties: the ability to absorb light energy, and the ability to transfer that energy to other molecules. Like much of molecular and cell biology, finding an authentic demonstration of these properties in an accessible and affordable lab activity can be challenging.

Enter P51™. Viewing chlorophyll under blue light illumination reveals that it is a fluorescent molecule. This phenomenon opens up a new angle to exploring chlorophyll’s properties. Chlorophyll is green when viewed under white light, because it best absorbs in the violet-to-blue and red portions of the light spectrum and reflects green light. But when chlorophyll is removed from the chloroplast and viewed under blue or ultraviolet light, something drastically different happens – it glows red.

In the leaf, chlorophyll efficiently passes energy captured from sunlight to downstream reaction centers of the thylakoid membrane where it is passed on to the electron transport chain. When isolated, chlorophyll cannot pass that energy to other molecules, and much of the energy is released in the form of fluorescence. That’s why when extracted chlorophyll is placed in the P51™ Molecular Viewer, it will glow red. On its own, this is an excellent demonstration of chlorophyll’s properties and the conservation of energy that is central to the process of photosynthesis. If students can explain why chlorophyll glows, they can explain the absorption and transfer of energy by a pigment.

Fluorescence observations can also be paired with classic chromatography lab techniques. In a typical leaf chromatography experiment, you can see two to three distinct bands: carotenoids and xanthophylls and usually a green band for chlorophyll. After separating pigments, students can cut the different bands out of the paper and place each in a different tube. By adding a small amount of solvent to the tube and shaking, the pigments will be washed from the paper. The leaf pigments have now been extracted from the leaf and separated into different solutions. By removing the paper and observing the re-extracted pigment in P51, student’s can not only observe fluorescence, but also determine exactly which pigments fluoresce, and which pigments do not.

As a bonus, this activity uses only affordable reagents available at any pharmacy for under five dollars: acetone and isopropyl alcohol. Throw in a couple tubes and a P51 (or other blue light source) and you’re good to go.

If you’re interested in trying this activity, we’ve created a full write-up for free download including background information, lab instructions, and study questions. You can find it here. You can find more information about P51 and other labs that you can do using blue light illumination here.

Enjoy, and let it glow!