— This post contributed by Aaron Pomerantz appeared originally on 7/5/2017 in thenextgenscientist.com

I’ve recently been testing portable tools for a project to take the “lab into the field”. One interesting little piece of equipment I heard about was the miniPCR, a portable thermocycler that has been used for field PCR experiments, for instance “A simple, economical protocol for DNA extraction and amplification where there is no lab“.

I got my hands on one of these little gadgets and put it to the test this week to see if I could amplify genes commonly referred to as DNA “barcodes”, which are used for species identification and molecular phylogenetic trees, such as: “Molecular phylogeny of Atractus (Serpentes, Dipsadidae), with emphasis on Ecuadorian species and the description of three new taxa “. This snake paper published by my colleagues in Ecuador utilized partial genes sequences of 16S, cytb, and ND4 genes to generate the snake phylogeny below:

My goal was to perform an experiment with the same DNA sequences as the snake paper using the miniPCR to determine if we can perform amplification of these genes outside of a lab setting. The end goal of the PCR amplification is to feed these sequences into the Oxford Nanopore Technologies (ONT) MinION, a portable gene sequencing machine.

The Oxford Nanopore MinION has a barcoding kit, which allows you to pool amplicons. Each primer used for amplification needs a special “universal tail” adapted beforehand, so I ordered primers for 16S, cytb, ND4, as well as COI with the ONT primer tails as follows:

So for example, the 16S primers looks like this:

Now with the primers and miniPCR in hand, I just needed some snake DNA! Lucky for me, a graduate student colleague in another lab at UC Berkeley had plenty of snake samples to work with (below referred to as “ALS” and “BRK”), so we extracted DNA using a standard salt extraction protocol.

To test the “portability” aspect of the miniPCR, I ran it at my apartment powered by an external Poweradd battery.

Here are the result of the first PCR run on a gel after a SPRI bead cleanup: 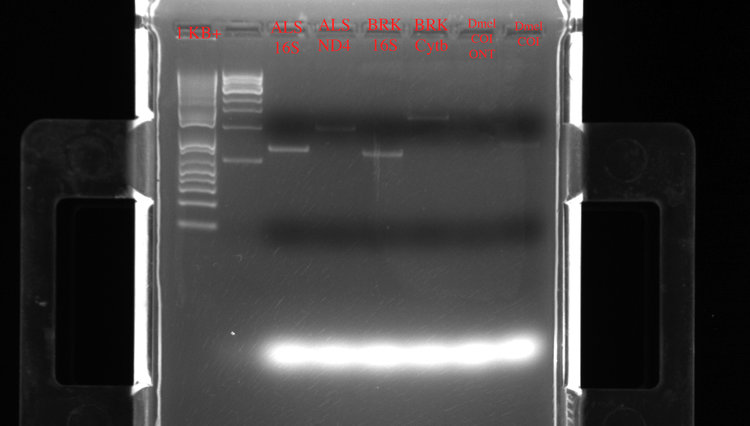 So not bad with the first round of miniPCR! Overall, the lengths on the gel match the expected amplicon length (16S = 585 bp, ND4 = 901 bp, Cytb = 1209 bp). To play it on the safe side, I also had the amplicons sent off to our DNA sequencing facility on campus and confirmed that they were indeed a match to the expected genes. The exception was the Drosophila sample, which interestingly matched to a Drosophila endosymbiotic bacteria (Wolbachia).

Now for the ONT barcode kit, we need to perform one more round of PCR, this time adding the barcode adapters 1 through 12. I made the scheme below to add barcodes to each individual sample of reptile DNA: ALS and BRK (both reptile species from my colleague at Berkeley) as well as some insect samples Plodia (moth), Junonia (butterfly) from our lab, and a Junonia collected form Peru.

And some of the gel results: 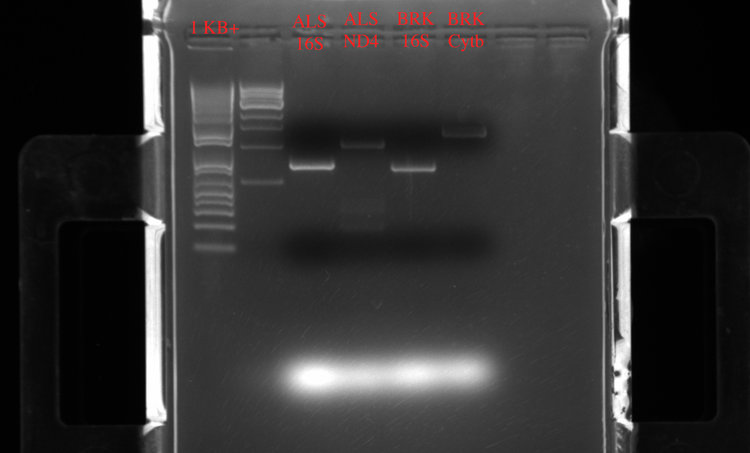 So overall, I’m impressed with the miniPCR! It has been consistent and reliable in producing expected amplicons – all within the confines of my apartment kitchen! The Poweradd battery works well to make the miniPCR portable, and each run seems to use ~20-30% of the battery.

The next step involves pooling these barcoded amplicons and sequencing on the MinION, which I have recently done but will dedicate a whole post to the sequencing and analysis next. Stay tuned! Q: What is a qPCR test?  A: An excellent way to engage your students on topics like viruses, biotechnology, and... read more We spend a lot of our time talking to science teachers. It is inspiring to find how many of... read more Here are the 15 DNA science events that captured our imagination in 2015. Enjoy! 5 January - Scientists from... read more Here goes our love and gratitude to supporters of DNA education who backed miniPCR on Kickstarter, pledging $5 or... read more We want to disseminate the meaningful work that Ilio Durandis and team at the Haitian Bioscience Initiative recently jump-started... read more This new video tells the story of miniPCR, told from the perspective of the team. miniPCR is a portable,... read more (. . . and much longer!) Myth: PCR product needs to be refrigerated if left overnight in the thermal cycler Truth... read more BioCoder is the self-described newsletter of the biological revolution. And miniPCR is the poster child (of the 2014 Fall... read more